Return to Information and Services 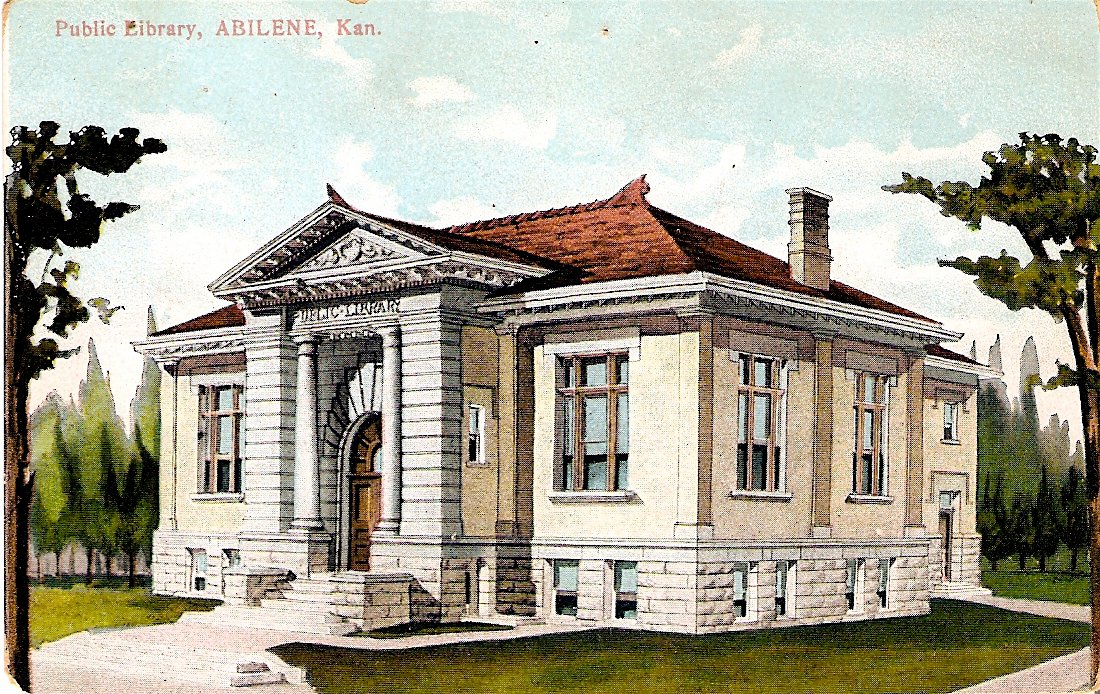 A Brief History of the Library

On December 20, 1900, the Ladies Literary clubs of Abilene held a meeting at the home of Mrs. Thomas Kirby for the purpose of organizing a Library Association.  Mrs. J.M. Gleissner was elected president of the new organization; Mrs. O.L. Moore, Vice-President; Mrs. H.L. Humphrey, Treasurer, and Miss Mace King, Secretary.

For the new Library Association, starting the library was a slow and tedious process.  The first successful fund raising venture was a lecture by William Jennings Bryan which earned the library 101 dollars.  The ladies had other means of raising money such as, rummage sales, a Schumann concert, and selling Ms. Lillian Russels fur coat.  Mr. Parker, of carnival fame, donated funds for a day from a merry-go-round and a mystic maze for the library benefit. With this money, the association was able to rent a room for 12 dollars per month on the second floor of the McInerney building (3rd and Broadway).  Miss Lida Romig was employed as the first librarian.  In 1903 the location of the library was changed to a room over what was the Kansas Power and Light office located at 200 N. Cedar.

In 1904 the women circulated a petition to vote on a tax levy of one mill to support the library. The question was favorably voted upon in the city election of 1905.  Soon after this action a board of trustees for the Abilene Public Library was formed and Mayor H.L. Humphrey wrote to Andrew Carnegie asking for a grant to erect a public library for Abilene.

There was great difficulty in securing a location after the Carnegie grant of $10,000 was obtained.  At the time, the location decided upon was an eyesore to the whole town, covered with rubbish, an unsightly livery barn, four or five rickety buildings used for blacksmith shops and second hand stores.  The property was condemned for park purposes and therefore cleared to build the library.  Andrew Carnegie agreed to increase his grant to $12,500 if the library board would agree to levy annually not less than 10 percent of his gift.

On October 1, 1908, the first building was presented to the public by Dr. F.S. Blayney, president of the library board; C.M. Harger accepted for the community.  Many books were contributed by interested citizens, but no new books were purchased with tax money until 1913. 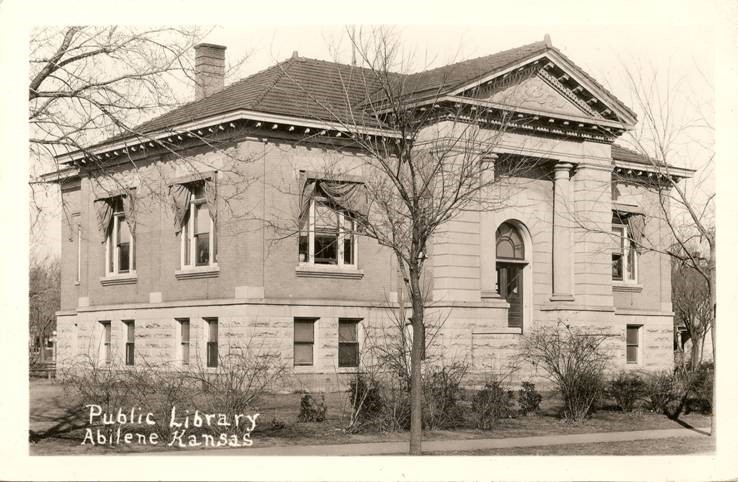 As the library grew in acquisitions, Miss Romig and the board realized the building was too small and they began to plan an addition to the North side. When the Public Works Administration came into being in 1930, the library obtained an allotment of $2,400 to add to the building fund, making a total of $10,081.  In 1933 construction was begun on a stack room on the north with large additions to both east and west wings of the original building.  This was opened for public inspection on June 13, 1934.

During World II the library was an outstanding war information center.

The legacy of Thomas M. Jones in 1943 provided a childrens library.  The upstairs room had long been crowded, and in May of 1943 the childrens books were removed from the east room upstairs, to a  new room downstairs. The children themselves named the new room in the basement the Robert Louis Stevenson room.

In 1974, plans were drawn for an addition joining the Carnegie library and the City building.  The addition would house new facilities  for the fire and police departments as well as an expansion for the library.  In 1976 the library board gained approval for the library portion of the project.  Work started in early 1977 and was open to the public December 4, 1977.  The total cost of the addition was $379,000.

On December 2, 1993 the Library featured the donated book collection of Dean W. Malott. Mr. Malott, born in Abilene in 1898, went on to become the Chancellor of The University of Kansas and the president of Cornell University. Mr. Malott who paid for the fine cabinets in the room, now known as the Malott room, had the room dedicated in memory of his father, M.H. Malott.  Incidentally, the first memorial book donated to the library in 1929 was in memory of Mr. Malotts mother, Edith Gray Johnson Malott.

Citizens of Abilene voted 3 to 1 to fund the 1.6 million dollar library renovation project with a .35 percent sales tax increase.  The city of Abilene also contributed $200,000 to the project which began November 11, 2008 and was completed February 15, 2010.  The Library moved to a temporary location at 1214 NW 3rd Street during this transition.

The renovated library now meets the regulations of the Americans with Disabilities Act. The entrance is now handicap accessible as well as the main level restrooms.  The library also underwent several other noticeable changes.  Two Thousand square feet were added to the west side of 1977 addition.  A fourth level with 2,800 square feet was finished to house the reference and biography books, as well as the community living room.  The Childrens library has expanded by using the former Friends of the Library rooms.  More space and new furniture have made it a cheerful and friendly environment.  The Friends of the Library room has moved to the main level of the library.

Mr. Carnegie wanted his money to be used for real and permanent good in this world.  One can only assume that Mr. Carnegie would be very pleased, that 102 years later what is now known as the Carnegie level of the library is used daily.  The city commission room has been updated as well as the Malott room.  Periodicals are now housed on the Carnegie level as is the microfilm reader in the genealogy room. A room formerly used as storage is now the Jordan Room, which is an ideal place for a group to hold a meeting or training.  Tim Geske painted and restored the dome, making the Carnegie level breathtaking.

Andrew Carnegie also thought his institutions should create ladders on which the aspiring can rise.  If one thinks about the many Abilene citizens who have frequented the library during the past 102 years, it can be assumed that the library certainly has served this purpose and will continue to do so.

Login or Search the Catalog